Quinn and fellow Field Camper at work in the Corner Garden this summer. Photo by Lawrence Braun.

Field Campers reminisce with Farmer Anne about hearing a couple of our cows the night before who had escaped their pasture. Photo by Lawrence Braun.

Quinn and fellow Field Campers relax after working in the Corner Garden. Photo by Lawrence Braun.

Catherine’s youngest, Quinn, with Place Based Learning Director Matt Davis during his final summer as a camper at Hawthorne Valley Farm

Every August, I feel a twinge of sadness, knowing that the end of summer is right around the corner. This year it washed over me like a surprise giant wave because it brought the end of a 12-year-long treasured tradition for our whole family. We picked up our last child from his last summer at Hawthorne Valley Farm Camp.

It all began when our first born, Ryan, attended the Hawthorne Valley Farm Visiting Students Program with his school in fourth grade. He returned home from the four-day trip and announced he was going to sleep-away camp there that summer. What an excellent way to tell us that his first trip away from home had gone so well! However, we didn’t think he meant it, as he had never been interested in anything other than Camp Mommy. Surely he wouldn’t want to miss our family’s 4th of July celebration at the beach! We were wrong. Nine months later, we loaded up the minivan with Ryan’s gear and his younger siblings, Chelsea, Amanda, and Quinn, and headed up to Hawthorne Valley Farm for our first camp drop-off.

It was magical! The farmhouse was buzzing with warm, welcoming energy, and the sense of community was palpable. We met the cows, pigs, chickens, and horses, along with all the counselors and administrators. We ate the beautifully prepared and delicious lunch of produce and cheese fresh from the farm and homemade bread with the other families. We helped Ryan get settled into the Ice House, a large room off the side of the farmhouse that was the boy’s dorm and held back tears as we said goodbye. He easily parted from us, and we drove away knowing that something extraordinary was about to happen for our son. We could feel that when we picked him up two weeks later, he would be a different person. What we didn’t know was how truly life-changing it would be for all of us. 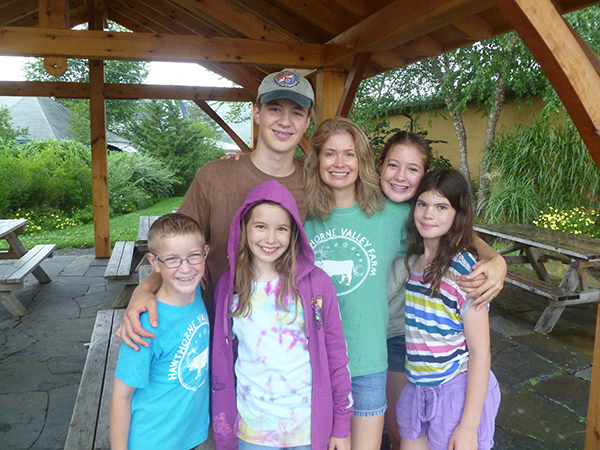 Catherine dropping off all her children and a family friend for summer camp in 2012.

Hawthorne Valley Farm quickly became a treasured family community for our children. Each child eagerly awaited their siblings’ drop-offs and pickups, but mostly, anticipating when it was finally their turn to go. They became valued members of the warm, welcoming community made up of counselors, support staff, farmers, apprentices, and store workers. A community so unique, that many former campers return as counselors as soon as they can, including Ryan. They were genuinely productive – weeding and harvesting vegetables from the garden to sell in the store or prepare for that night’s dinner, turning the cows out to pasture and cleaning the cow barn, helping in the dairy and farm store. They felt appreciated and valued for their real-world efforts along with enjoying the traditional staples of summer camp such as swimming in the pond, games, and singing camp songs.

The farm was a respite for our children and our family during their elementary through early high school years from the challenging school social environment. Hawthorne Valley Farm affirmed not only that they, as people, were accepted and okay, but also that they were more than enough and worthy of celebration. They were given space to be creative and artistic without fear of judgment. It was a break from all the forces that create self-doubt in a young person. All the things that made them question themselves in their day-to-day lives went away in this safe and accepting environment, which helped grow their self-confidence.

They developed physical and mental stamina during long hikes while learning about the vast nature that surrounded them. Working alongside each other in the fields, they began to learn the importance of cooperation. Being trusted and relied upon to do real and vital work instilled a sense of capability and confidence. They experienced the value of hard work and developed resilience. They learned valuable skills, such as using tools and caring for animals. They grew empathy and compassion through their friendships while increasing their understanding and appreciation for a lifestyle so different from their own. They also gained a deeper understanding and appreciation for the complexity and value of our earth. They even learned how to contra-dance!

I am so grateful for all the things Hawthorne Valley Farm Camp gave our family, and I am so sad that this period in our lives has come to an end. But then again, maybe our relationship with the farm is just shifting into the next phase as next year we may be dropping off another counselor.

Amanda, Ryan, Chelsea, and Quinn at Hawthorne Valley Farm for Ryan’s first year as a House Camp Counselor in 2016.

To learn more about Children’s Programming at Hawthorne Valley Farm, stop by Hawthorne Valley’s Fall Festival on October 13 or visit the Place Based Learning Center’s website.