So much has changed in the world since the last time we hosted our Fall Festival in 2019. Due to safety concerns about large gatherings and the need for us to limit visitors on our farm to protect our farmers’ health, we are unable to host an in-person celebration of the harvest this year. However, we are pleased to bring you the Fall Festival Magazine!

This publication includes pieces of all your favorite traditions at the Fall Festival–children’s activities, pie, vendors, and more. You can pick up your free copy of the magazine at the Farm Store or any of our Greenmarket locations. We also hope you check out our additional content below.

Be sure to enjoy “The Crossing of the Sea,” a puppet play presented by The Magical Puppet Tree, follow Farmer Jess as she brings in the cows and learn about how working with the herd inspires her art (including our beautiful magazine cover), and learn more about the life cycle of butterflies with the Farmscape Ecology Program!

Hawthorne Valley Farm‘s Livestock and Dairy Herd Manager Jess Brobst on the daily rhythms of managing a dairy herd and how farm life is a source of inspiration for her art. Special thanks to Nina Barry for producing this video.

The Magical Puppet Tree presents “Crossing the Sea: A Tale for Michaelmas Time.” This is a tale of courage…a young child seeks to share the beauty of his garden with those who live in a land that has become dry, arid, and bereft of life. In order to do so, he must steer towards the light of his star despite hardship and stormy seas. Based on a Wynstones Michaelmas story by E. Brooking. This is a collaborative work that embraces the miracle of creative endeavor! Many thanks to Ragnar Freidank, Janene Ping, Renannah Weinstein, Odin Esty, Somer Serpe, and Jen Zimberg for making this offering possible.

Resources to Learn about Food Insecurity

We know it can seem daunting to embark on a learning journey about food insecurity in our own places, but understanding our food system and the inequalities that are inherent in it are integral to understanding social injustices in the United States.

For Columbia County, where Hawthorne Valley is located, according to a 2018 5-Year Estimate by American Community Survey, an estimated 6.9% of families live below the poverty level. Of those, 6% are White, 14.1% are Black or African American, 17.4% are Asian, and 18.3% are Hispanic. Of the total population, 11.9% are living below the poverty level, with 10.4% of those being White, 20% Black or African American, 27.4% Asian, and 23.1% Hispanic. Poverty is adversely affecting our young people. Of those living below the poverty level, 23.1% are under 5 years old, and 14.1% are between 5-17 years old. For more information about the demographics of Columbia County, search for “Columbia County NY” at data.census.gov.

Here a few resources that we would recommend for learning more about this topic and the impact COVID-19 has had our country’s most vulnerable.

Are you interested in supporting efforts to combat food insecurity in our county? Or are you in need of assistance for your family? Here are some of the food pantries and organizations taking up this important work:

Adapted from the Wynstones collection by E. Brooking

Once upon a time, when was it? When was it not?

There was once a child who lived in the light of a star that blessed a beautiful garden. There, many flowers bloomed with a perfection of color and scent found nowhere else. The wildest of animals were tame and lived together in peace.

The child had many friends; playmates and wise elders who taught him how to tend the earth and learn the secrets of the heavens. He knew how to shelter and protect seeds until they were ready to be planted and grow, how to find the sweetest fruits, how to help a baby bird if it had fallen from its nest, and how to help sick animals to become well again.

One day when the child was resting after a happy day in the sun, a thought arose. “Here, everything is so pleasant – is it like this everywhere”?

One of the wise ones heard this and answered, “No, there is a country a long way from here, across the sea, where the people are not so happy, and where life is hard. They do not know how to take care of the earth – the land has become arid and dry, and very little will grow. The cold wind blows the trees into crooked shapes, and the sun seldom shines.”

“Could it not be as beautiful as it is here?” the child asked.

“Yes,” replied the elder, “but the people have forgotten how to make it so. Many of them wish for a more beautiful world.”

“I am sorry for those people. I wish that I could help that place. Perhaps I could take some of the seeds of the beautiful flowers and other plants that grow here and journey to that land to plant them there, and share with the people how to grow such a garden as ours. I could help them to catch all the sun when it shines and shield the tender shoots from the wind and the rain.”

The wise one pondered and said, “If you are strong enough to make the journey you may go, but you will need to follow the light of your star. It will show you the way. If you lose sight of your star, you will become lost and may never reach the land you are seeking nor find the way home again.”

The child looked at the light of the star that shone above and felt courage. Surely the right way would be revealed. So he said, “I will go,” and gathered seeds from the garden. All kinds of seeds – from flowers that gave sweet scent or beautiful colors, from plants that gave fruit and were good to eat, from plants that had healing powers. Carefully, the seeds were put into a special pouch that would protect them from water, heat, and cold. The wise ones gave their blessings, and the child began walking in the direction of the sea. It was a long journey with many adventures and lessons along the way.

The sun was setting and moon rising by the time the child, weary and footsore, reached the sea, its salty spray upon the air. There on the shore was a little cockleshell of a boat that seemed to be waiting for him. Launching the boat into the waters, he climbed inside, rowing out into the waves. The child’s star was there shining in the night sky next to the moon, and so showed where the boat should be steered. The gentle rocking of the boat then lulled him to sleep – so tired after many days and nights of travel.

When the child awoke, the stars and moon were hidden by dark storm clouds. A wind had whipped up the waves into rough seas that tossed the little cockleshell of a boat to and fro. Then a big wave came crashing and almost capsized the boat. Though he managed to hold onto the prow, the oars fell into the sea and were lost. With the oars gone, he could not row and was dependent upon the current – but which way to steer the rudder? The child almost lost hope, thinking, “I cannot go forward or back…. What will become of me?”

Just then, in the dark of the sea and sky, he remembered the words of the wise ones. “Keep on the path of your star.” He called out in the darkness, “Star of my spirit, shine for me – that the light of love, may always be. Show me the way to the land that I seek!”

Three times the child called out in the darkness these words. Then, as if in answer, from the heights of the heavens, there fell down through the storm clouds, a shooting star. It was so bright that it lit the night as if it was day as it fell towards the earth. It revealed that land was not far off, and the child was able to steer the boat toward the direction of the shore.

At last, as the sun began to rise, the little boat reached the beach of that distant land. He saw that indeed, it was rocky and barren, with little growing there and few trees. An old woman had seen the boat reach the shore, and she went toward the water to see who had come to land. The people of that land were gaunt and sad; they were distrustful of strangers.

But when the old woman saw that it was just a small child, she was filled with wonder. There had not been any children in that land for many years. This child seemed to be filled with golden light. “I have brought you seeds from across the sea,” said the child. “Will you help me to grow a beautiful garden?” And showing her the gifts of good seeds from his garden, the child reached up to take her hand.

Together they climbed the sea cliff to the fields above. There, the child met other people of that land and taught them how to plant the seeds and tend the garden that sprouted, how to water them as they rose up, to learn from the sun and rain about the rhythms of the seasons, to work together to overcome what was difficult, and to love something so much that it bloomed in answer to the tender care that was received. And as the garden began to grow, birds and other animals came back to live in that place. It became as beautiful as the land the child had come from. 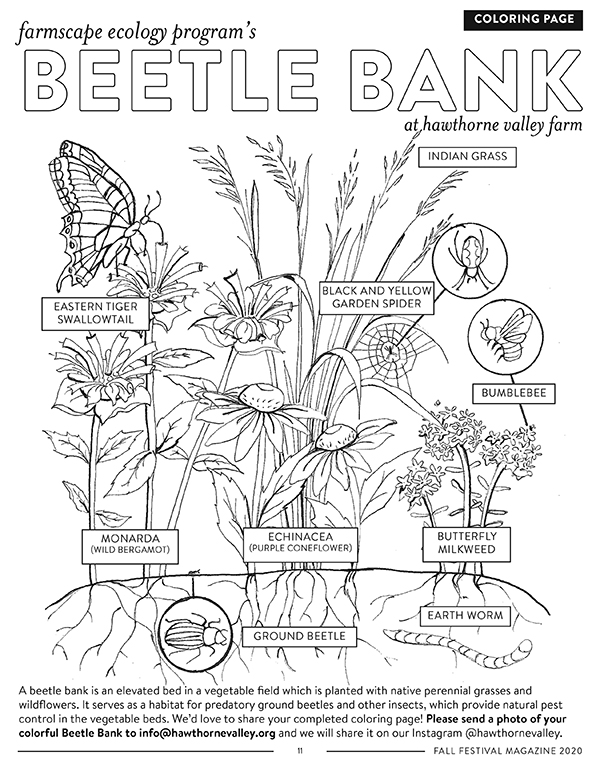 The Fall Festival is an annual celebration of the harvest, and a gesture of gratitude to our community, whose support makes all of our diverse programming a reality.

Although we cannot come together in person, we hope that you will still consider making a gift to honor our farmers, food producers, and researchers who continued to work on and with the land; as well as our teachers, store employees, and colleagues who have persevered and worked tirelessly to meet the community’s needs during this unusual year. Without you, their work simply would not be possible.

On behalf of all of us at Hawthorne Valley, thank you! We look forward to seeing you again at next year’s Fall Festival!

Special thanks to our Sponsors!