Welcome to Season 2 of Roots to Renewal

Hawthorne Valley is excited to announce the launch of Season 2 of Roots to Renewal: a 50th Anniversary podcast. In this first episode, we are thrilled to feature Greg Watson as our guest.

Greg is the Director of Policy and Systems Design at the Schumacher Center for a New Economics and a self-described life-long student. He has spent nearly 50 years studying systems thinking as inspired by Buckminster Fuller and has worked to apply that understanding to achieve a more just and sustainable world. 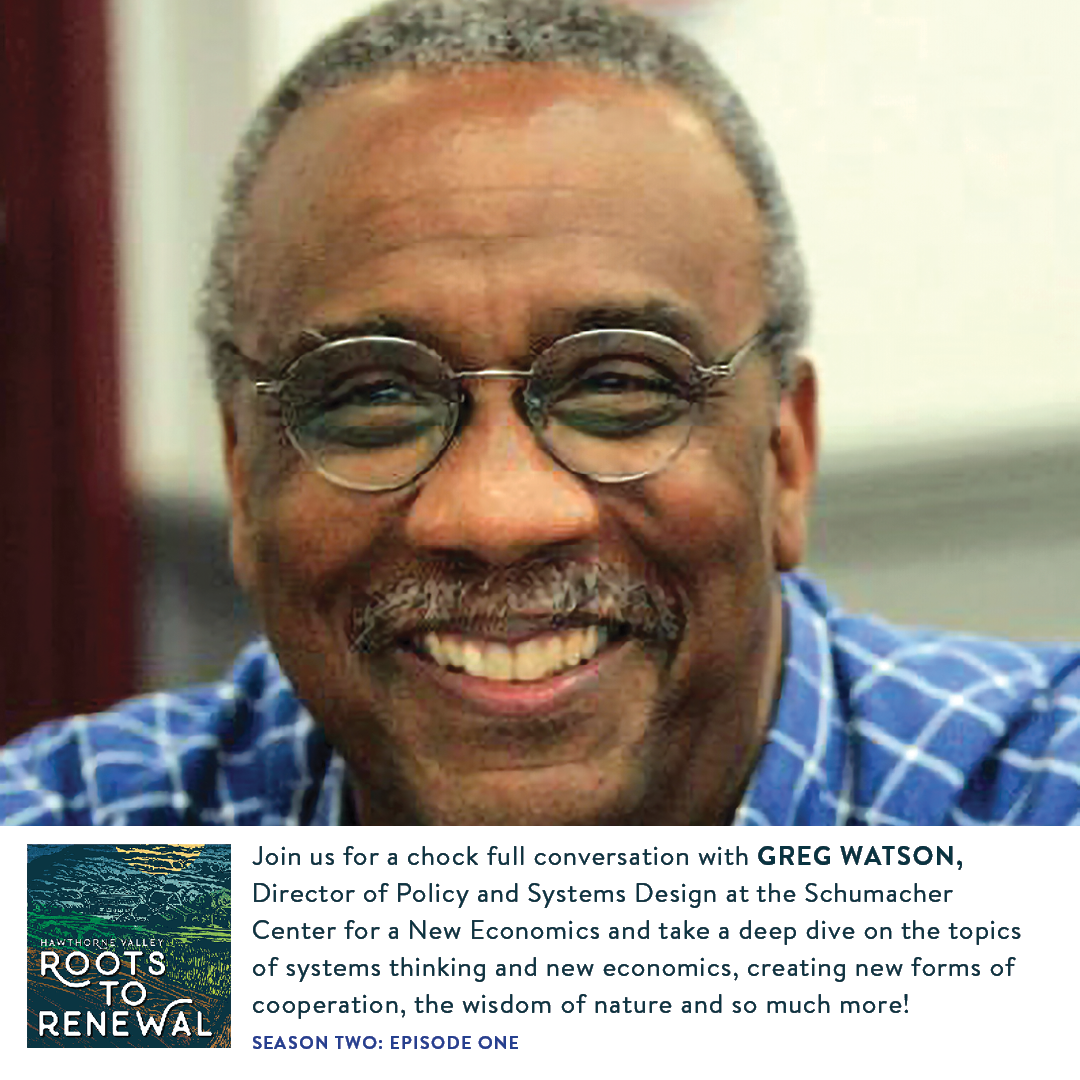 “I first met Greg when he was working for the Dudley Street Neighborhood Initiative in Boston, and have continued to be deeply inspired by his work,” says Martin Ping, Hawthorne Valley’s executive director and podcast host. “I hope our listeners will also be inspired as they hear about his involvement in many future-bearing and life-bearing initiatives.”

In this episode, Greg and Martin take a deep dive on the topics of systems thinking and new economics, creating new forms of cooperation, the wisdom of nature and so much more. They discuss Greg’s current work, as well as his time at the Dudley Street Neighborhood Initiative and as the Secretary of Agriculture in Massachusetts.

In talking about systems thinking, Greg says: “We don’t have all the answers and we’re going listen and we’re going to watch. We want to observe and we need to be willing to fail. Maybe it’s not going to work, but in the systems sort of approach to thinking, you learn a lot more from failure than you do from the successes because the successes basically reaffirm some of your assumptions and the failures make you reexamine and maybe improve your model…. Rather than try to bluff my way through, let me accept the fact that maybe my thinking is not as sound. And so what do I need to do? What’s the missing piece? I think that iterative process and that humility and that listening is not just listening to other people, but also listening to the earth.”

To hear more, listen to Roots to Renewal where ever you get your podcasts, or on our website here.

Special thanks to Tierra Farm, a family-owned manufacturer and distributor of organic dried fruits and nuts that puts the people they serve and the planet we share before all else, for their continued generous support of this podcast.

Greg is Director of Policy and Systems Design at the Schumacher Center for a New Economics. His work currently focuses on community food systems and an initiative to improve global systems literacy informed by a reimagining of Bucky Fuller’s World Game Workshop. Greg has spent nearly 50 years studying systems thinking as inspired by Buckminster Fuller and has worked to apply that understanding to achieve a more just and sustainable world. He has served on the board of the Buckminster Fuller Institute and as a juror for the Buckminster Fuller Challenge.

In 1978 he organized a network of urban farmers’ markets in the Greater Boston Metropolitan Area. He served as Commissioner of Agriculture in Massachusetts from 1990 to 1993 and again from 2012 to 2014 when he launched a statewide urban agriculture grants program.

Greg gained hands-on experience in organic farming, aquaculture, wind-energy technology, and passive solar design at the New Alchemy Institute on Cape Cod, first as Education Director and later as Executive Director. There he led the effort to create the Cape & Islands Self Reliance energy cooperative.  He served four years as Executive Director of the Dudley Street Neighborhood Initiative, a multicultural grassroots organizing and planning organization where he initiated one of the nation’s first urban agriculture projects (anchored by a 10,000 square foot commercial greenhouse).

Watson was the first Executive Director of the Massachusetts Renewable Energy Trust (now the Massachusetts Clean Energy Center). In 2005 he coordinated the drafting of “A Framework for Offshore Wind Energy Development in the United States” and the following year founded the U.S. Offshore Wind Collaborative. Watson was part of the team that landed the National Wind Technology Testing Center in Massachusetts.  He served on President-elect Barack Obama’s U.S. Department of Energy transition team in 2008.

In 2015 he founded the Cuba-U.S. Agroecology Network (CUSAN) following a trip to Cuba to learn about its agroecology system. CUSAN links small farmers and sustainable farm organizations in both countries to share information and provide mutual support. He is on the editorial board of MEDICC Review, journal of the nonprofit Medical Education in Cooperation with Cuba.

Join us this Saturday from 10 am - 4 pm for Hawtho

This large and distinctive-looking insect is calle

This is the second episode of our second season, a

This butterfly is called the Common Buckeye. Despi

The Chatham Agricultural Partnership and Columbia

Our most recent blog post, "Ecology of the Social: